May 27, 2021
Continuing the Story… As I last left off, it was March 2020 and I had a positive pregnancy test, much to our surprise.   I was terrified; Dust couldn’t stop smiling.   Given the anti-kell antibody diagnosis I had received 2 years earlier, I had joined a couple of alloimmunization groups on facebook.   While those groups were incredibly educational, they were also terrifying.   I had seen women have failed procedures, I had seen women lose their babies, I had seen the reality of anti-kell.   So not only did I have my incompetent cervix to worry about, the early miscarriage from two years earlier which I was afraid would happen again, I also had kell antibodies to deal with, which were even more terrifying.   I mean, my body literally attacks a kell positive baby inside me.   How freaking terrifying is that?   My body, which is meant to grow and nourish a baby for 9 months would literally destroy the red blood cells of that baby.   Look, I get it, it was our choice to get pregnant,
Post a Comment
Read more 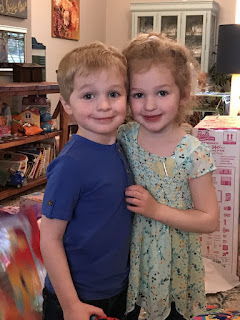 Kanon and Remi are 5!

Hello? Is anyone home?

Knew it was going to end...

Michelle Lynne
I'm a momma to 5 precious babies...two in Heaven and three here walking with me. I'm so thankful for God's grace and His blessings. I'm wife to my incredible husband, who is the love of my life. I'm a CPA by day, and this blog provides a bit of an outlet for me, and documents my journey to motherhood.

Blogs I have Followed